An Afternoon with Nicholas Kristof 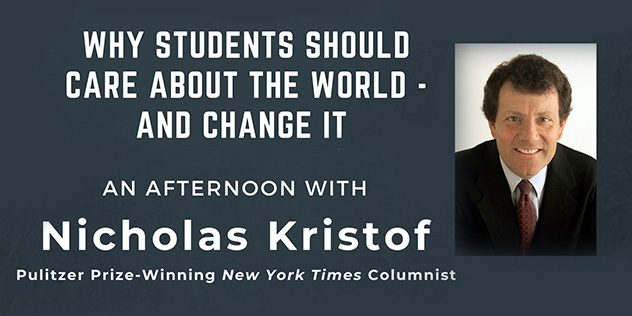 - Tickets are not required for entrance -

Nicholas Kristof is an American journalist and political commentator. A winner of two Pulitzer Prizes, he is a regular CNN contributor and has written an op-ed column for The New York Times since November 2001. Kristof is a self-described progressive. According to The Washington Post, Kristof "rewrote opinion journalism" with his emphasis on human rights abuses and social injustices, such as human trafficking and the Darfur conflict.

Mr. Kristof grew up on a sheep and cherry farm near Yamhill, Oregon. He graduated Phi Beta Kappa from Harvard College and then studied law at Oxford University on a Rhodes Scholarship, graduating with first class honors. He later studied Arabic in Cairo and Chinese in Taipei. While working in France after high school, he caught the travel bug and began backpacking around Africa and Asia during his student years, writing articles to cover his expenses. Mr. Kristof has lived on four continents, reported on six, and traveled to more than 140 countries, plus all 50 states, every Chinese province and every main Japanese island.