Andrew McCarthy Live! - Plus a Screening of Weekend at Bernie’s 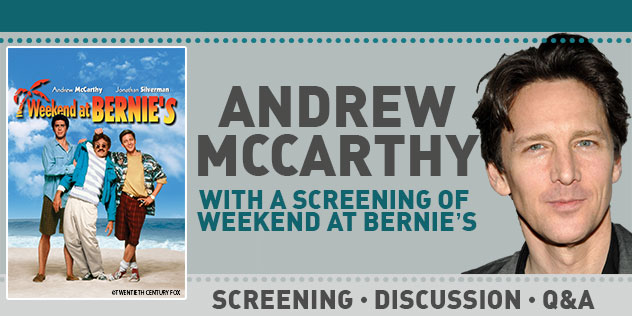 Andrew McCarthy is a director, an award-winning travel writer, and—of course—an actor. He made his professional début at 19, appearing in dozens of films, including The
Spiderwick Chronicles and The Joy Luck Club, as well as such iconic movies as Pretty in Pink, St. Elmo’s Fire, Less Then Zero, and cult favorites Weekend At Bernie’s, and Mannequin.

He has starred on Broadway and on television, appearing on numerous shows as a series regular and guest star, including The Family, Lipstick Jungle, Stephen King’s Kingdom Hospital, and every season of Law & Order. He is also a highly regarded television director, having worked on Blacklist, Orange is the New Black, The Enemy Within, Condor, New Amsterdam, TURN, Alpha House, Black Box, Gossip Girl, and White Collar, among others.

Now is your chance to see him live on stage!  Enjoy a screening of the classic hit film Weekend at Bernie’s followed by a moderated discussion and Q&A with the audience.

*VIP tickets include a Post-Show Meet & Greet with Andrew McCarthy