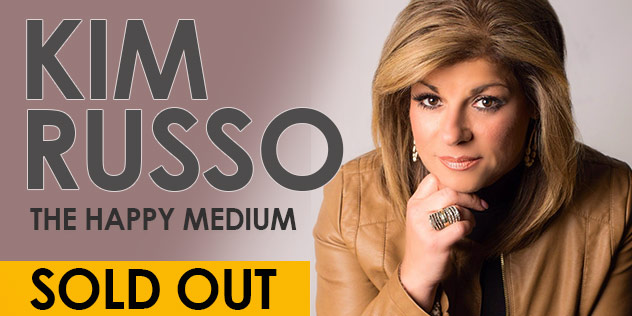 ** The purchase of a ticket does not guarantee a personal reading.**

This unique event will include an introduction to Kim Russo, followed by readings with the participants!

Kim Russo is an accomplished, highly sought-after medium who has been communicating with spirits for nearly two decades. Fluent in the language of the spirit world, Kim has helped friends, family and clients confront the fears that haunt them most, and embrace the truths that bring increased light, love and understanding into their lives.

The word of Kim’s gift spread wide, and she quickly found herself appearing in the A&E hit series “Paranormal State” and "Psychic Kids" as well as Bio Channel’s "Celebrity Ghost Stories”. These opportunities paved the way for her own series, "The Haunting Of...," which became the #1 series on LMN. Lasting six seasons and nearly 80 episodes, “The Haunting Of...” features Kim week after week taking a celebrity back to the place where they experienced the paranormal. In each episode, Kim unravels the mystery while also uncovering deep personal moments from the celebrity’s past. This series led to A+E Networks green-lighting another series for Kim called “Psychic Intervention.” In this emotional six-episode run, Kim turned her attention to helping families in dire crisis by connecting them to the other side for a spiritual kind of counseling. With the success of these programs, A&E has decided to bring back their popular weekly paranormal series, “Celebrity Ghost Stories”, featuring Kim Russo as the show's psychic medium and host.

A self-proclaimed skeptic, Kim always wants proof before she believes things to be true, therefore, she willingly has become a certified medium by The Forever Family Foundation in 2005 to which she currently sits on the foundation’s Medium Advisory Board, and The Windbridge Institute for Applied Research in Human Potential in 2011, both of which subjected her to a battery of double-blind tests to prove the accuracy of her readings. Both
organizations are dedicated and committed to proving the existence of life after death by integrating mediumship along with scientific studies. Being accredited is no easy feat, and Kim’s scores proved to be exemplary.

In 2016, Kim published her first book, "The Happy Medium" – Life Lessons from The Other Side, from Harper Collins publishing company. Debuting at #1 in Amazon’s spiritual book category, The Happy Medium interweaves experiences from Kim's life with some of the best, most astounding behind-the-scenes stories of her celebrity readings from episodes of her Lifetime show, “The Haunting Of” In addition, she gives readers the tools to access the energy that is all around them, including experiments and lessons she uses in many of her sold-out theater appearances and classes, she teaches around the world. Kim's second book, "Your Soul Purpose" - Learn How to Access the Light Within is available everywhere books are sold.

Kim believes the most important of our soul's purpose is to implement and share our God given gifts with the world. To that end, Kim's biggest enjoyment is speaking at hundreds of engagements across the country, addressing eager audiences of all different ages, religions, and beliefs.

The Pullo Center would like to thank you for your patience and support over the past few months.

Due to state and university limitations on large gatherings, the Pullo Center is unable to present public performances during Spring 2021. We hope to resume live performances in Fall 2021. Please view our available events in the view schedule tab.

The Pullo Center Box Office remains closed until further notice, however our team is still here to answer any questions and assist you with any ticketing concerns.   For the safety of our staff and guests, please do not visit the Box Office in person.  Please email ALP20@PSU.EDU or TMR27@PSU.EDU.   We will respond to you as quickly as possible.  Box Office hours will be updated when we resume normal operations.