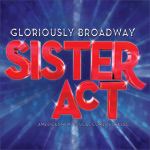 SISTER ACT is Broadway's feel-amazing musical comedy smash! The New York Post calls it "RIDICULOUSLY FUN,” and audiences are jumping to their feet in total agreement! Featuring original music by 8-time Oscar® winner ALAN MENKEN (Beauty and the Beast, The Little Mermaid, Little Shop of Horrors), SISTER ACT tells the story of Deloris Van Cartier, a wannabe diva whose life takes a surprising turn when she witnesses a crime and the cops hide her in the last place anyone would think to look—a convent! Under the suspicious watch of Mother Superior, Deloris helps her fellow sisters find their voices as she unexpectedly rediscovers her own. A sparkling tribute to the universal power of friendship, SISTER ACT is reason to REJOICE!