Chanticleer - An Orchestra of Voices is coming to The Pullo Center 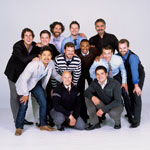 Called “the world’s reigning male chorus” by The New Yorker magazine, and named Ensemble of the Year by Musical America in 2008, the GRAMMY® award winning ensemble Chanticleer celebrated its 35th anniversary in the 2012-13 season during which it performed more than 100 concerts in 29 of the United States, in Europe, and in the Asia/Pacific region. Praised by the San Francisco Chronicle for their “tonal luxuriance and crisply etched clarity,” Chanticleer - based in San Francisco - is known around the world as “an orchestra of voices” for the seamless blend of its twelve male voices ranging from countertenor to bass and its original interpretations of vocal literature, from Renaissance to jazz, and from gospel to venturesome new music.