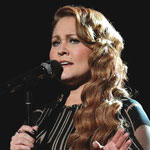 America met York County local DaNica Shirey on NBC’s “The Voice” and she will now return to The Pullo Center to perform a full length concert. DaNica will be performing with the band Shrimpboat (www.shrimpboatband.com) during this February concert.

DaNica inherited her love of music from her father, who was her manager and best friend. After his passing three years ago, DaNica took some time off from music, got engaged and had a child.  She auditioned for The Voice in hopes of honoring her dad and getting her music career moving again. After being featured on the second audition show of the hit NBC series, DaNica landed a spot on team Pharrell.  This was quite the achievement for the now 25 year old stay-at-home mom.  Finding herself back in the spotlight after three and a half years, DaNica has continued to receive praise from all of The Voice judges and impress audiences all across the country.