John Hiatt Solo and Acoustic is Coming to The Pullo Center 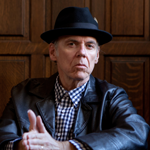 Called “one of rock’s most astute singer-songwriters of the last 40 years” by the Los Angeles Times, Hiatt continues to write brilliant songs including “We’re Alright Now,” the first single from Mystic Pinball which is described by The Huffington Post as “…a hypnotic, energizing and inspirational anthem of rebirth and reassurance reminding us to once again, have a little faith in ourselves, each other and times to come.”

Hiatt and his band, The Combo, have gained a reputation for captivating crowds at their live shows as The Tennessean depicts: “He prowls the stage, delivering the bluesy stuff in a whiskey-burn howl, shouting the rock stuff and fronting a formidable band that can turn on a dime, from ballads to bombast.”

John Hiatt’s career as a performer and songwriter has spanned more than 30 years and everyone from Bob Dylan, Eric Clapton, BB King, Bonnie Raitt and Iggy Pop has covered his work.