John Pinette is coming to The Pullo Center 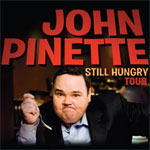 John Pinette will present a hilarious evening of stand-up comedy at The Pullo Center on Saturday, April 13th at 8pm. Tickets go on-sale this Friday, February 15th at 10am and can be purchased at ThePulloCenter.com, The Pullo Center Box Office, or by-phone at 717.505.8900. This is an all ages show.

When describing his own stand-up, Pinette says “I talk about my life; it is the funniest thing I can think of.” His current comedy special “Still Hungry” debuted on Comedy Central on July 29th and was released on DVD in August. The food-obsessed, storytelling Pinette, delivers smart, original, Bill Cosby-influenced observations on everyday life. “Still Hungry” is a follow-up to his successful “I’m Starvin’!” and “Show Me the Buffet” CD’s and DVD’s.

John Pinette is no rookie to the stage. For the past sixteen years, Pinette has been in entertainment one way or another. Once he realized he could use his knack to make people laugh and turn it into a career, he left his job as an accountant and began touring comedy clubs around the country.

His caught his big break when he was asked to tour with Frank Sinatra and he’s since become a regular guest on The Tonight Show and The View. Most recently, Pinette came off the theatrical stage and to the stand-up stage after wrapping up his starring role as ‘Edna Turnblad’ in the winning Broadway musical Hairspray.

His note-worthy accomplishments include being named Stand-Up Comedian of the Year by the American Comedy Awards in 1999 and he was also nominated for a Gemini Award for his television performance at The Montreal Comedy Festival in 2000.  Pinette’s acting career includes roles alongside Gwenyth Paltrow, Arnold Schwarzenegger, and John Travolta. He is experienced in both film and television and has been featured in programs such as Parker Lewis Can’t Lose and starred as a car-jack victim in the final episode of Seinfeld.