Rick Springfield - Stripped Down is coming to The Pullo Center 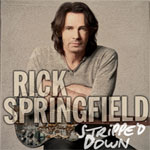 For all of his accomplishments as an actor, best-selling author and documentary subject, Rick Springfield has always insisted his first love is music, a passion he’s harbored since first picking up the guitar at the age of 12 in his native Australia.

With 25 million albums sold, 17 top-40 hits, including “Don’t Talk to Strangers,” “An Affair of the Heart,” “I've Done Everything for You,” “Love Somebody” and “Human Touch,” as well as a 1981 Grammy® for Best Male Rock Vocal win for his No. 1 hit single “Jessie’s Girl” behind him, Springfield has more to say with his latest Universal Music Enterprises release, Songs for the End of the World.

Still playing nearly 100 live shows a year, Springfield’s current musical career renaissance can be traced back to 2004’s Shock/Denial/Anger/Acceptance and 2008’s UMe bow Venus in Overdrive, which entered the Billboard sales charts at No. 28, his highest debut in 20 years, with Sony Legacy’s 2005 retrospective Written in Rock: The Rick Springfield Anthology sandwiched in between. An Affair of the Heart, a documentary which captured the close ties between Springfield and his fans, came out earlier this year, winning special jury awards at both the Nashville and Florida Film Festivals.  He also recently wrote and recorded a new song with Dave Grohl (Foo Fighters / Nirvana) along with being a featured guest in Grohl’s new documentary about “Sound City,” the fabled San Fernando Valley recording studio.

With Songs for the End of the World, Rick Springfield continues to do what he does best—applying his sardonic view to life as we live it today, offering a ray of hope in the midst of all the turmoil.