Robin Spielberg is coming to The Pullo Center 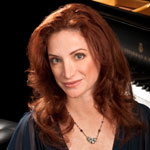 Steinway Artist Robin Spielberg is releasing her 17th CD this month and The Pullo Center is proud to present the Pennsylvania premiere of Robin's newest works from her brand new release "Another Time, Another Place." An artist with a talent with words as well as music, Robin Spielberg's concerts always intertwine musical performance with stories that inspire, enlighten and make us laugh.

Robin Spielberg is one of America’s most beloved pianist/composers. With an impressive tour schedule and hundreds of thousands of recordings sold, this Steinway Artist has been winning the hearts of listeners around the world with her compelling melodies and sensitive piano technique since debuting her first recording of original solos for piano, Heal of the Hand.

Thousands of people have been both entertained and touched by Ms. Spielberg’s live concerts; her natural talent for making audiences immediately comfortable transforms what could easily be an ordinary evening at the concert hall into a very special concert event. “Robin has such a personal and expressive way of playing, and her story-telling about the origins of the music makes the pieces come alive...the evening was both touching and mesmerizing” writes Wind & Wire Magazine of Robin’s San Francisco area concert. “Robin Spielberg has an undeniable melodic gift” says New York Concert Review of Ms. Spielberg’s Carnegie Hall debut.

A prolific composer, Spielberg has sixteen recordings to her credit and appears on over 40 compilations around the world. Her discography includes albums of original piano solos, arrangements of American standards, original pieces for piano/ensemble, recordings for the holidays, a CD of Americana melodies, and a CD of lullabies.

Spielberg’s debut recording on her own playMountain Music label, Dreaming of Summer, topped charts in Thailand, China, Hong-Kong, Korea and Malaysia, with one of the tracks also gaining popularity with audiences from its use as a soundtrack in the Korean award-winning television drama Winter Love Song. This track, Spielberg’s creative and compelling improvisation on the Canon in D has been Robin’s best-selling download on iTunes for fourteen years.