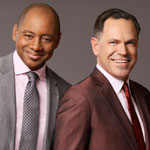 The Pullo Center at Penn State York welcomes The Branford Marsalis Quartet with special guest Kurt Elling to our stage on Thursday, April 20, 2017 at 7:30 p.m. Ticket prices are $75 VIP and $49, and they are on sale now!  VIP tickets include a meet and greet with Branford Marsalis.  Tickets can be purchased at The Pullo Center Box Office, charge by phone at 717-505-8900 or online at ThePulloCenter.com.

The Branford Marsalis Quartet will be joined by guest-vocalist Kurt Elling in a singular collaboration of musical forces. The tight-knit working band featuring Marsalis on saxophones, Joey Calderazzo on piano, Eric Revis on bass, and Justin Faulkner on drums rarely invites other musicians into the folds of their nearly telepathically cohesive unit, and Elling’s deep jazz vocabulary, technical versatility, and outstanding intonation will enable the band to perform a variety of material in new ways.

Energized by the artistic promise of this collaboration, the band members have all contributed new arrangements to perform with this special line-up and will be looking beyond the Great American Songbook. Although following the format of a standard jazz quartet with vocals, the collaboration between jazz’s most intense band and one of jazz’s foremost singer should prove to be anything but standard.