The Pink Floyd Experience is Coming to The Pullo Center 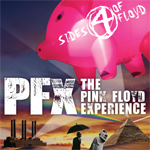 Featuring a spectacular light show, state of the art video, full quadraphonic sound and six outstanding musicians, PFX – THE PINK FLOYD EXPERIENCE brings you the most authentic Floyd experience. It’s “a must-see for any Pink Floyd enthusiast!” (C-News, Northampton, MA). In addition to the 4 SIDES OF FLOYD you’ll hear a set of Pink Floyd’s Greatest Hits, including “Money”, “Wish You Were Here”, “Comfortably Numb” and more!

Some Floyd Facts: More than 200-million albums have been sold since 1967. Four Grammy nominations in the '70s, '80s, and '90s. They were one of the first bands to use pyrotechnics, video, and light shows in their stage acts. They were inducted into the Rock and Roll Hall of Fame in 1996. ”Dark Side of the Moon” broke all chart records when it stayed on the Billboard Top 200 Album charts for 741 weeks. It stayed there from 1973 to 1988. Nearly 1,000,000 Pink Floyd catalog albums are sold each year worldwide.