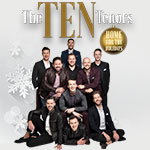 The Ten Tenors bring their Home for the Holidays Tour to York with a generous mix of festive favorites and modern holiday hits. The Ten Tenors perform at The Pullo Center on Sunday, December 8, 2019 at 7:30 p.m. only. Tickets are on sale now, and can be ordered by calling 717-505-8900 or online at ThePulloCenter.com.

The TEN Tenors are bringing back their highly acclaimed show Home for the Holidays, after numerous hugely successful tours of the US.

This time the ensemble will focus on spreading the cheer at venues primarily along the East Coast of the USA, where they’ll perform a lively mix of holiday favorites featuring everything from Feliz Navidad and O Holy Night to Winter Wonderland and even Bohemian Rhapsody – all given the signature The TEN Tenors treatment, with incredible 10-part harmonies and smooth choreography.

The TEN Tenors are a true musical success story, having started more than two decades ago as a casual group of talented friends, and grown over the years into one of the most popular classical-crossover super-groups in the world.

With millions of fans across the globe, The TEN Tenors have headlined more than 2,000 concerts around the world, entertained more than 90 million people, performed alongside artists including Lionel Richie, Rod Stewart, Andrea Boccelli, Willie Nelson, Alanis Morissette and Christina Aguilera, and recorded 15 albums, including their recent chart-topper Love Is in the Air.

The group playfully blends rock, pop and opera, and are “truly incandescent when performing at the full strength of 10” according to Variety. The New York Times says their “unique mix of the traditional and unconventional offers a fresh and highly-original take on the staid traditions of opera.” TTT have appeared on The Today Show, Oprah’s Australian Adventure, and Extreme Makeover: Home Edition, among others.