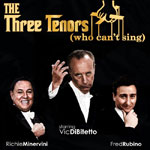 The Three Tenors (who can’t sing) is a night of stand-up (and a sit down) with three made men of comedy. The 22 city national tour will be visiting The Pullo Center in York, PA on March 4.

The Three Tenors (who can’t sing) stars Vic DiBitetto, now considered the Godfather of Comedy. DiBitetto has taken the internet by storm with tens of millions of views and multiple viral videos including "Bread and Milk" and his own television talk show. Vic has toured the country selling out clubs and theaters along the way with his murderous brand of comedy that kills audiences.

Joining DiBitetto are two stand-up guys from the neighborhood - Richie Minervini and Fred Rubino - both top headliners in The Family. The three performers will bring their incredible stand up to the stage and then have a sit down together with hilarious improvisation and audience participation. It's comedy in a red sauce - an offer you can't refuse.

Tickets are priced at $35 and there is also a $20 VIP upgrade available that includes a 'meet & greet' with the tenors and an autographed photo.