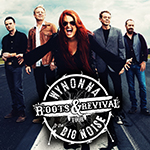 Once dubbed by Rolling Stone as “the greatest female country singer since Patsy Cline,” Wynonna’s rich and commanding voice has sold over 30 million albums worldwide. Five-time GRAMMY winner and New York Times best-selling author, Wynonna has received over 60 industry awards, with countless charting singles, including 20 No.1 hits such as “Mama He’s Crazy,” “Why Not Me,” and “Grandpa, (Tell Me ‘Bout The Good Ole Days).”

“My roots are firmly planted in Country music, the music that has been a backdrop to the lives of so many of my fans,” says Wynonna. “But I was given wings and I’m grateful, after all this time, for the freedom to be myself and sing the music that I love.”

Wynonna, along with her band The Big Noise, will explore the past, present and future of Wynonna’s extensive 33-year career on the 2017 Roots & Revival Tour.

Wynonna & The Big Noise, led by husband/drummer/producer, Cactus Moser, released their debut full-length album in February 2016 via Curb Records to critical acclaim. Wynonna has described the new sound as “vintage yet modern” and a “return to the well.” It’s a rootsy work encompassing country, Americana, blues, soul and rock. NPR’s Ann Powers noted that, “With her tight band behind her after touring together for several years, she just sounds like she’s home…You can just feel the grin on her face.”