Earl David Reed is Coming to The Pullo Center 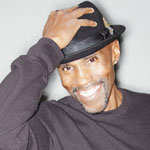 The Pullo Center at Penn State York welcomes Earl David Reed’s The Secret to my Unsuccess Comedy Tour with special guest Kayla Kroh to its stage on Friday, April 11, 2014, at 7:30 p.m.  Ticket price is $26.50 and a portion of the proceeds benefits Leg Up Farm.  Tickets are on sale now, and can be purchased at The Pullo Center Box Office, charge by phone at 717-505-8900, or online.

EARL DAVID REED is a trendsetter in the comedy and radio world. Within his 15 years of stand-up comedy, Earl has performed at over 100 comedy clubs and colleges and is a favorite in Las Vegas and Atlantic City. Along with his 10 years of morning broadcasting experience and numerous television appearances, his improvisational style has become a favorite of radio and stage audiences all around. Deemed the “ultimate morning show co-host for any format”, he presently can be heard weekday mornings on WQXA 105.7 the X on the Nipsey, Earl and Jen Shade Show. Earl’s point of view always turns out to be an informative and entertaining one. His radio station resume consists of WPLR in New Haven, CT; WCMF in Rochester, NY; KBUL in Salt Lake City, UT; WCAT in Harrisburg, PA; KURR in Salt Lake City, UT. Earl was selected to perform at the GRAND OL OPRYS’ RYMAN AUDITORIUM in Nashville for the filming of “BILL ENGVALLS ALLSTARS OF COUNTRY COMEDY”, a compilation of the country’s top comedians which is out on DVD. Other DVDs include "Laffs from the Hood" and "Straight Trippin' 2". Earl's the only African American comedian with an urban and country DVD out at the same time! Some of his other accomplishments include being a two-time STAR SEARCH winner, appearing on NBC’s FRIDAY NIGHT VIDEOS, A&E EVENING AT THE IMPROV, FOXS’ COMIC STRIP LIVE, SHOWTIME AT THE APOLLO, CAROLINE’S COMEDY HOUR, HBO, SHOWTIME and more. He also has filmed a TV pilot for DISNEY called CLASS CLOWNS for DICK CLARK PRODUCTIONS. He will soon release his first comedy CD titled “FUNNY N FIT!” Featured in MENS FITNESS MAGAZINE and the cover of SIR MAGAZINE, Earl has transformed himself from an overweight 245 lbs to an amateur bodybuilding trophy winner. EARL DAVID REED’S dynamic presence combined with his hard-driving wit, and improvisational style delivers a performance that leaves radio and comedy audiences breathless and always wanting more.

For more information on Leg Up Farm, visit legupfarm.org