Gloriana is coming to The Pullo Center 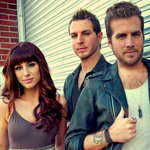 Ask any unknown musicians who’ve sweated it out on the club scene — as brothers Tom and Mike Gossin did before moving to Nashville in 2007 and joining forces with Rachel Reinert — and they’ll tell you that having a dream just isn’t enough. Achieving success takes strong motivation to commit, something these three young talents have proven willing to do as their career has exploded over the past two years. From sharpening their live show, to sending a demo to Emblem Music Group owner Matt Serletic (who signed them), to moving in together and secluding themselves for a month to put their stamp on the stellar songs that appear on their 2009 debut album, everything the members of Gloriana have done has been about their passion for creating music.

That pledge, as well as their authentic talent, have propelled the group to become the best-selling debut country act of 2009. Gloriana debuted at No. 2 on the Billboard Country Albums chart and No. 3 on the Top 200 chart and spawned the gold-certified hit single “Wild At Heart.” Gloriana also won the fanvoted- on American Music Award for Breakthrough Artist, as well as the “Nationwide On Your Side” honor at the CMT Awards. The album’s success led to two years on the road, during which the band performed in front of millions worldwide as Taylor Swift’s handpicked opening act on her Fearless Tour. They also opened shows for Jason Aldean, Alan Jackson, Brooks & Dunn, and the Zac Brown Band. In 2010, Gloriana won the Academy of Country Music’s Award for Top New Vocal Group and were nominated for a Teen Choice Award for “Choice Country Group.”

Now Tom, Mike, and Rachel have funneled everything they’ve learned into their second album, A Thousand Miles Left Behind, due for release in Summer 2012. “We’ve grown up a lot as a band,” Mike says. “We’ve honed in on singing and playing together and have really found our sound as a group.” This time around, the group were intent on revealing more of themselves as artists. “On this record, we wanted to tell stories,” says Rachel. “I think people will be able to relate to a lot of these songs because they’re honest and come from a place that’s real.” The result is an appealing mix of up-tempo, good-time numbers: “Wanna Take You Home,” “Sunset Lovin’,” “Go On…Miss Me,” “Doin’ It Our Way,” and graceful, heartfelt tunes: current single “(Kissed You) Good Night,” “Can’t Shake You,” “Turn My World Around,” “Carolina Rose,” and “Soldier Song”. “(Kissed You) Good Night” is climbing the country charts, while its accompanying video (starring Megan Park and Tyler Hilton) had its premiere on ABC Family in January.

“Like any new act, we were finding ourselves on the first record — in the recording process and as musicians,” Tom says. “The new album really just feels like us, who and where we are now, to the point where we know exactly what we want to do and how to get there.”