Legends in Concert is coming to The Pullo Center 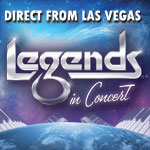 Legends in Concert, the original and world’s greatest live celebrity tribute show, kicks off its first national performing arts center tour beginning October 2016. Legends in Concert will be presented for the very first time in York, PA at The Pullo Center on October 6, at 7:30 p.m. Ticket prices are $49 and $34, and go on sale August 3, at 10:00 a.m.  Members can order now. Tickets can be purchased at The Pullo Center Box Office, charge by phone at 717-505-8900 or online at ThePulloCenter.com.

Direct from Las Vegas, this internationally acclaimed production takes audiences on an electrifying journey through the songbooks of many of music’s legendary singers with world-renowned tribute artists, a live band, talented singers and dancers, lavish multimedia theatrical sets and authentic costumes. Seen by over 30 million fans, Legends in Concert is widely regarded as the ‘ultimate fun & feel good show’.  “It’s not just the stunningly similar appearances to the superstars; it’s also the pitch-perfect live vocals and signature choreography that make up the complete winning package,” wrote Robin Leach, renowned journalist of “Lifestyles of the Rich and Famous.”

This will be the first time in its 33-year history that Legends in Concert will hold engagements in over a dozen premier theaters in cities across America. The tour’s incomparable cast will replay the soundtracks of our lives as they bring memories back honoring the legendary Prince and his incredible catalogue of hits such as “Purple Rain” and “Kiss.”  Fans will “Believe” they are turning back time with a sensational homage to Cher, while Aretha Franklin is given a tribute fit for the “Queen of Soul” bringing audience members to their feet with numbers like “Chain of Fools” and “Respect.”  Show revelers will sing along with live recreations of Sir Elton John and fan favorites like “Crocodile Rock” and “Rocket Man.” A phenomenal tribute to “the Boss,” Bruce Springsteen, will take us back to “Glory Days.”  The musical experience will be hosted by an extraordinary tribute to the Blues Brothers™ with their fun-filled soul music and engaging brand of comedy.  During the first leg of its planned multi-year tour, the high quality production will also feature Legends in Concert’s signature video reinforcement including iconic imagery celebrating the superstars the show pays tribute to.

ABOUT LEGENDS IN CONCERT

Legends in Concert is the longest running production show in Las Vegas.  Now in its 33rd year, it was voted the “Best Tribute Show” in the 2015 Las Vegas Review-Journal 2015 reader’s poll.  Owned and operated by On Stage Enterprises, Legends in Concert debuted at Imperial Palace Hotel and Casino in 1983 and later moved to the historic Flamingo Las Vegas and Casino in 2013 in conjunction with the show’s 30-year anniversary. Initially introduced as a limited six week engagement, this Las Vegas staple now performs 10 shows a week, year round. Packed with all-star talent and powerhouse vocals from many of the world’s top tribute artists, the legendary show entertains audiences of all ages. The tribute artists perform using their own natural voices, and are backed by a live band that rocks the house with vivacious back-up singers and dancers who bring the performances to life. In addition to Las Vegas, On Stage produces Legends shows in such markets as Atlantic City, Branson, Foxwoods Resort Casino, Long Island, Myrtle Beach, Niagara Falls, in Waikiki at the Royal Hawaiian Theater, on the high seas aboard the Norwegian PEARL, in numerous seasonal international locations and produces the acclaimed Broadway style touring theatrical production Elvis Lives: http://elvislivestour.com. Connect with Legends in Concert on Facebook, Instagram and Twitter.  www.legendsinconcert.com

TM: The Blues Brothers is a registered trademark owned by Dan Aykroyd and Judith Belushi