Molly Ringwald Revisits the Club is coming to The Pullo Center 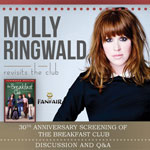 On December 10, delight in a 30th anniversary screening of everyone’s favorite coming-of-age dramedy, The Breakfast Club, followed by an interactive discussion and Q&A with Molly Ringwald herself. Tickets ($125VIP or $45 plus applicable service fees) go on-sale June 26 at 10:00 a.m. at ThePulloCenter.com, by phone at 717-505-8900, or at The Pullo Center Box Office. A limited number of VIP tickets will be available that include a meet and greet with Molly. Pixy Stix-Cap’n Crunch sandwiches and sushi are not included.

Whether you’re a Brain, Athlete, Basket Case, Criminal, or Princess, longtime fans and new audiences alike can celebrate the return of this iconic film to the big screen. Detention has never been more fun, especially when one is getting the inside scoop from Molly Ringwald!

Molly Ringwald’s diverse career has included movies (Pretty in Pink, Sixteen Candles), Broadway (Enchanted April, Cabaret), music (jazz recording Except Sometimes), & writing (When It Happens To You, Getting The Pretty Back). The Breakfast Club is known as the "quintessential 1980s film" and is considered as one of the best films of the decade. The film was ranked #1 on Entertainment Weekly’s list of the 50 Best High School Movies (2010). Molly Ringwald was ranked #1 on VH-1’s 100 Greatest Teen Stars (2011).

Molly Ringwald Revisits the Club is presented by FanFair which celebrates the passion we have for cinema, bringing audiences together in-person with some of their favorite stars to celebrate and re-discover classic films in a whole new way. Moderated discussions, stories from the filming, meet-and-greets, & much more, FanFair brings the backlots of Hollywood to your city.