The Brand-new, Smash-hit Musical ON YOUR FEET! is Coming to The Pullo Center 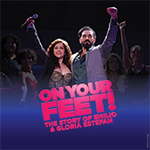 The Pullo Center at Penn State York will present a brand-new production of the smash-hit musical ON YOUR FEET! THE STORY OF EMILIO & GLORIA ESTEFAN. This inspiring true story about heart, heritage and two people who believed in their talent—and each other—has already won the hearts of audiences and critics alike. ON YOUR FEET! will play the The Pullo Center April 11, 2023.

ON YOUR FEET! THE STORY OF EMILIO & GLORIA ESTEFAN is produced by GFour Productions and Evan Bernardin Productions through a special license from Theatrical Rights Worldwide and is represented by Columbia Artists Theatricals. This exciting new production is directed and choreographed by Luis Salgado, who performed in the original Broadway production of ON YOUR FEET! and was the Assistant Latin Choreographer of In the Heights on Broadway, which won four Tony Awards®. In May 2022, Salgado directed and choreographed the world premiere of ON YOUR FEET! in Spanish at GALA Hispanic Theatre in Washington D.C. which The Washington Post praised production as “boisterous... and dreamlike.”

“We are absolutely thrilled that our musical will once again be shared with audiences across the United States in this brand-new production of ON YOUR FEET! led by Luis Salgado,” Gloria and Emilio Estefan said about today’s announcement. “We've had tremendous fun sharing our story on the stage since our show first hit Broadway in 2015 and it is our hope that we can continue to inspire and uplift people with its celebratory message, especially at a time when we all need it so much.”

Salgado said, “This story exemplifies the American Dream through the eyes and work ethic of Cuban immigrants. The Estefans have given us permission to dare to dream bigger. They allowed their truth to resonate through their music, penetrating all of us, whether you’re Latino or not. This joy is a gift we want to give to our audiences.”

“We are passionate about opening the door of representation on this tour and nurturing a diverse family both backstage and on stage, with creative team members who are joining us from around the world,” he added. Several creative team members from the Washington D.C. production will join the national tour.

ON YOUR FEET!, the exhilarating original musical based on the extraordinary life of 26-time Grammy Award-winning husband-and-wife team Gloria and Emilio Estefan, features a book by Academy Award and Golden Globe winner Alexander Dinelaris and a score made up of some of the most loved and iconic songs of the past quarter-century including “Rhythm is Gonna Get You,” “Conga,” “Get On Your Feet,” “Don’t Want To Lose You Now,” “1-2-3” and “Coming Out of the Dark.” Having begun in Chicago in the summer of 2015, ON YOUR FEET! made its Broadway bow that November, played for two years, and received seven Outer Critics Circle Award nominations, three Drama League Award nominations and a Tony Award® nomination for Best Choreography.

Casting will be announced at a later date.

Tickets to ON YOUR FEET! are on sale now and are available at The Pullo Center Box Office. Call 717-505-8900 or purchase online at ThePulloCenter.com.